The Red Queen and The Sending You've heard the news, right? Isobelle Carmody's final (and we mean final) Obernewtyn Chronicles book, The Red Queen, will be released in paperback and eBook format by Penguin on November 12th, 2015. Well - there's more - from our favourite author herself.

[hr][/hr]Earlier today the following message showed up on all of Isobelle Carmody's social media accounts:

It was accompanied by this picture: 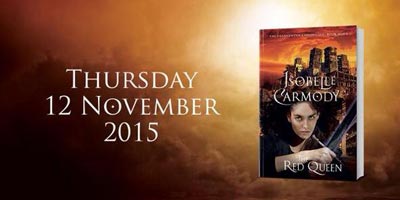 In an email to Obernewtyn.net, Isobelle revealed to us before she logged off that she is taking leave of the internet and "going dark" to throw herself into the final stages of The Red Queen. Once she's finished, then she'll be editing it. "And when I come out of the dark, it will be [on Obernet] first in an interview with you." Squee!!! So in the lead up to Isobelle's return to the interwebs, we're asking for your questions in The Q&A thread (Ask Isobelle). Ask anything you want; be creative, funny, serious, whatever you like. The Q&A will take place in June so we've got about 6 weeks to come up with something really great. Other news from Isobelle included that the Ford St edition of Scatterlings will be out in June, and that Evermore, Isobelle's new - and gorgeous - graphic novel, illustrated by Daniel Reed - will be out in October. To take leave of her blog, she has posted a special reveal poster/comic, illustrated by Dan Reed as well, on The Slipstream, which we've been given permission to post here: 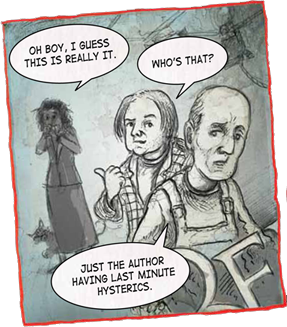 ~ click to view full comic in a new window ~
Penguin AU has also confirmed via this press release that The Red Queen will be available in paperback and ebook format from the release date. All the best to Isobelle for the final stretch! We'll miss you! Win a copy of the new Obernewtyn audiobook! Such an exciting announcement but so bitter sweet to know that it will be coming to an end.

Big big news! Looking forward to sharing in all the excitement with Obernetters (it's been too long ^.^)